Heacham was the birthplace of John Rolfe, the seventeenth-century English settler who introduced a marketable form of tobacco to Virginia and helped develop the agricultural system of the colony.  He was baptised on 3 May 1585, an occasion which is documented on a parish record held by the Norfolk Record Office.

Rolfe left England in 1609 on the Sea Venture, which was famous for blowing off course and becoming stranded on the Island of Devils (now called Bermuda).  His wife gave birth to a child which they named Bermuda, but the baby died shortly after.  This voyage was the inspiration for Shakespeare’s The Tempest. Rolfe’s wife died in 1610 just months after their final arrival in Virginia.

Rolfe is also known for his marriage to the Native American Pocahontas in 1614, which ended a war between the Powhatan tribe and the English settlers. In 1616 they returned to England and Pocahontas was presented at Court. She became ill just before their departure in 1617 and died at Gravesend in Kent.  After her death, Rolfe returned to Virginia but their son Thomas, who had taken ill, was left behind and raised by his uncle Henry Rolfe at Heacham Hall. An ancient mulberry tree in the grounds is said to have been planted to mark Pocahontas’s visit there.  John died from illness (part of a wider epidemic) in Virginia around 1622.

Thomas Rolfe returned to Virginia in 1635 when he was about 20 years old. It is possible he founded the town of Heacham which was formed about this time. He remained in America taking up his father’s work as a tobacco farmer and married Jane, daughter of Francis Pothyress, leaving issue an only daughter, Jane, from whose marriage to Colonel Robert Bolling, many eminent American families are descended. 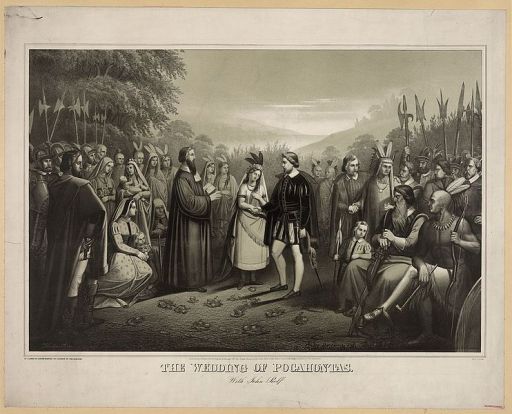 19th century print of the wedding of Pocahontas to John Rolfe
This image is in the public domain because its copyright has expired.